Kelby and some others at Station 40 left last night for Baton Rouge in three fire trucks. They were delivering donated items for the Austin Food Bank. It’s about a 7 hour drive from Austin, and their plans were to drop off the supplies and turn around for home.

The phone rang this morning about 8:15; Kelby was calling to tell us he was back home and ready to go to bed. He said everything went very smooth — no problems getting through on roads and everything in BR was well marked and very organized. That was good to hear!

The mayor of New Orleans, Ray Nagin, was being interviewed on a news program last night. When asked if his SOS radio interview last week was what caught Washington’s attention, he said he didn’t know, but something did. He talked with President Bush and “GW” told him that the ball had been dropped in getting help to them, but that was going to be fixed! When asked if he (Mayor Nagin) agreed with a comment Jesse Jackson made while flying over a bridge full of survivors — that it looked like the hull of a slave ship — Nagin said he didn’t believe that the slow response was a racial issue, but it certainly could be a class issue — a class of very poor people not getting the help they needed sooner. He also felt that New Orleans was not gone — that it did have a future. Hopefully he is right and that these people who lost everything will have their city to go home to one day — a city rebuilt with compassion. Other cities hit by disaster in the years past were rebuilt — Galveston, Chicago, and San Francisco — and have thrived. Putting New Orleans back together may mean using a different “pattern” to make it a safer place and it may mean relocating it a bit to higher ground. Doubtfully it will be the Crescent City we once knew and were fond of visiting with all of the familiar sites and events — but, if it can be home again for those who had to leave, let’s do it.

You’ve heard of “twice-baked potatoes,” right? I think the recipe involves something like: bake the potatoes, slice them in half, scoop out most of the potato from the middle, mix a bunch of things like chopped green onion, sour cream, bacon bits, salt and pepper into the scooped out portion of potato; refill the potato shells and bake it all again — maybe topped with some cheese.

Well, I didn’t make that. But I did make a peach cobbler with a cake-like topping. Now, the peaches in this cobbler are very delicious and special — I drove to Fredericksburg-Stonewall area at least three times in June and July and August to get this Dixie Land variety! I spent about 4 hours peeling, slicing, sugaring, and bagging them for the freezer. So, whenever we have these peaches — it is a real treat.

Yesterday we had dinner with Randy and family at our new Red Robin. The dessert menu appeared, and I said “oh no, let’s don’t get dessert here — you all come over and I’ll put a peach cobbler in the oven.” Well, Melissa and the kids and I headed home to do that; Randy and Terry headed to a car dealership to “look.”

The “easy” cobbler recipe I have been using lately has to be doubled. Last time I made it, the pan I used wasn’t large enough and we had a mess in the oven to clean later. BUT . . . it was delicious. So, this time, I made sure to pick out a larger pan!

As I was putting the ingredients into the big bowl — measuring each item carefully and doubling each ingredient — the telephone rang. It was Randy calling about a car he and Terry had found. I guess that my listening skills and my attention-to-detail skills are dysfunctional when paired up. The result was a topping on those wonderful peaches that only had 1 cup of flour in it instead of 2! So, it was more like a crunchy slice of topping than like the nice cake-like topping we love. Besides that, the cobbler wasn’t done and out of the oven until after 10 o’clock. Nobody wanted peach cobbler that late!

So, this morning I decided that we were not going to waste the two gallon bags of peaches I had used in this cobbler. Carefully, I used a little spatula and scrapped off the crunchy topping and ate any attached peaches that were clinging on. I got out all of the ingredients again, the recipe, and a big bowl. I concentrated on each measurement and made sure that this looked right! It did, and so back on top of the pan of “once-baked” peaches it went and back into the oven for 55 minutes.

NOW, we have a wonderful cobbler — a “twice-baked cobbler,” that is! 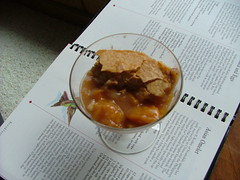 Last November, Melissa and I took a Quilt Class for Beginners at a local quilt shop. We went to a 4 hour class once a week for four weeks — and had “big time” homework after each class. We picked our fabrics the first visit. She chose a Christmas quilt theme, and I spotted a print with a cowgirl, dogs, and horses that Brielle would love.

The quilt class goal was to finish the quilt top, which we did. We got written instructions on finishing the quilt, but that didn’t seem enough to me. So, my good friend, Betty gave me some information each time we talked “quilting,” and then with her urging and encouragement, I started machine quilting it at her house in the spring. Finally, I got the binding finished this summer, and that left the label. After chosing the font and the words I wanted to use, I had to find a way to get the computer printout transferred to the fabric so that I could embroider it. Using a hot transfer pen from Michael’s, that was done in July. The embroidery work didn’t take that long, but I didn’t finish it until August. So, the next time that Brielle came to our house, I wanted to surprise her with the finished quilt — and that was today, September 3. We took pictures of her with her quilt, 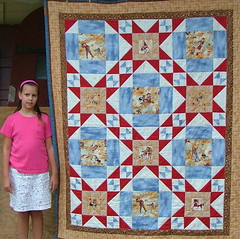 and she was so appreciative. In fact, she spent the night with us and her quilt was used tonight. It was a quilt made with much love for a very sweet grand-daughter!

My “newfangled” Dell “All-in-One” 962 printer is installed and working! I’m very satisfied with my $119 (plus tax, free shipping) printer — at least, so far! My little “oldfangled” Canon S300 printer and Visioneer Scanner have been “retired.” The Canon came “free” with my Sony Vaio computer about 5 years ago — so, it lasted a long time. It was still printing using the color cartridge, but nothing in black. Tried to hang onto it by replacing the printhead, but when I did that, neither cartridge worked! The little Visioneer was a “cheapie” from Sam’s, and it’s still working fine — but I don’t need two scanners. Now, if I can just find that ream of printer paper that I bought last week at Wal-Mart — I know it’s here somewhere!

Beau had to go to the vet today. He is 15 years old and in dog years, that makes him older than most of us. 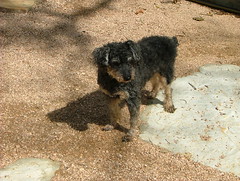 Dr. T. took Beau’s temp and said he did have a slight fever — but nothing else obvious to explain his inability to stand or walk. Gave him an antibiotic and cortisone shot, and I brought him home to sleep the rest of the day. Beau’s half-sister, Rory (Woo), was taken home with Paula and Tom the same day we got Beau in April 1990. Woo passed away last week, I am sad to report. Fifteen years with these lovable pets make parting difficult.

Beau fell asleep on the carpet under the dining table as soon as we got home. He seemed to be ok, and I was dressed for Curves — so I headed there to get in my 30 minute workout. Each time you enter, you scan an ID card and your name and the number of times you’ve been there shows up on a little screen. This was my 20th visit — in 10 weeks — not enough! Supposed to go 3x a week — AND supposed to lay off the Blue Bell and chocolate goodies — so, guess that explains why the inches aren’t coming off! I’ll keep “trying.” Someone put it this way re eating fattening goodies . . . “it would have been worse had you eaten those and NOT gone to work out.”